Charlie Kaplan’s path to making sculpture began with his interest in the melding of form and functionality found in old hand tools: he created his first work out of a piece of abandoned Douglas fir using a set of chisels acquired for the purpose. The experience was life-changing.  While still working in the family business full-time, in 1995 he began studying sculpture seriously, working with both stone-carvers and practicing artists in Pietrasanta where he spends each summer, as well as in classes near his home in Los Angeles.

Since 2006 Charlie has devoted himself full time to his art, following his passion to create abstract forms that are expressive, elegant, and most importantly “listen to the stone.”  His inspiration comes from the carefully chosen stone itself, allowing his mastery of the material and well-honed instinct to join forces, creating sensual, tactile forms that walk the line between pure abstraction and representational reference. As Christopher Eamon stated in his catalogue essay “The sculptural work of Charlie Kaplan practically begs one to touch it.”

Almost since the beginning, his work was placed in private collections in the U.S. and Italy, but it was only ten years ago that Kaplan began to exhibit in galleries and public spaces. In 2009 the city of Pietrasanta installed one of his large scale works on its main pier, and in both 2017 and 2018 he was selected to show in the prestigious Cibart Festival in Sevarezza, Italy.  In 2016 he was offered a solo exhibition at the Museo Gigi Guadagnucci in Carrara, the only living artist to be so honored.  Last fall his one-man exhibition at the Sidney Mishkin Gallery at Baruch College in NYC featured Soaring, a large scale-work that has since been acquired for permanent installation in the William and Anita Newman Library at Baruch College. 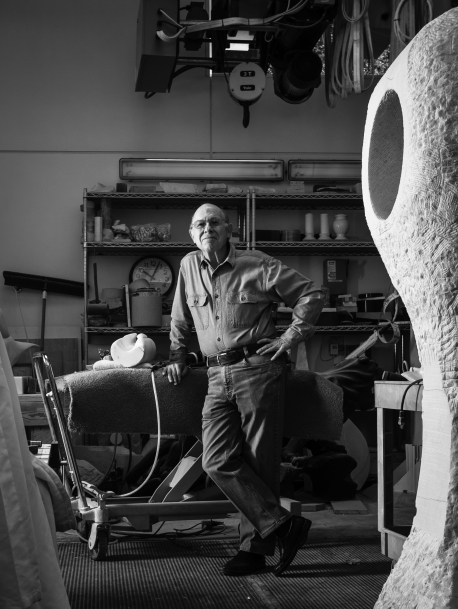